I love mushroom. So much. That`s why I love playing Mario Bros. Wait. What?
I saw this stuffed mushroom in a Japanese cookbook and I kept thinking to give it a try. In fact, I did make it today. In the original recipe, only shrimp is used for stuffing. So I thought I might want to add something to it, because I just didn`t want to spend my time too much on preparing the shrimp. See? Being lazy sometimes makes you more creative. 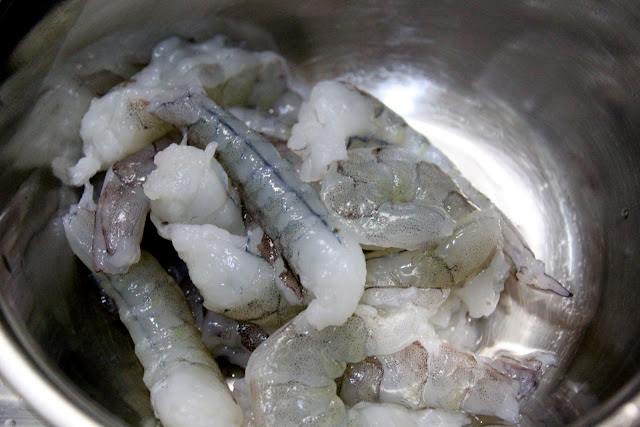 If you use frozen corn kernels (like I did), thaw them first at room temperature or simply rinse them with hot water until they are softened enough to be processed. 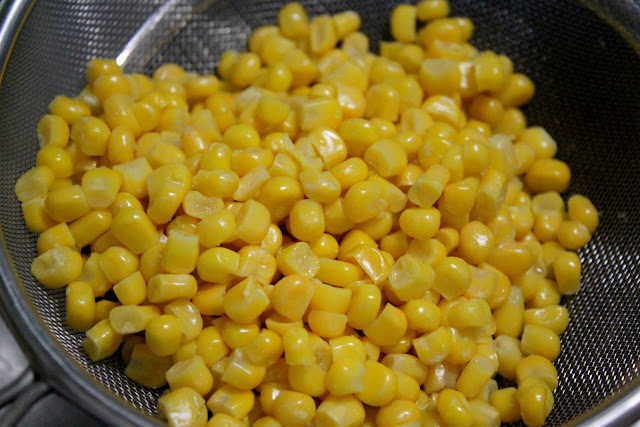 Now put the shrimp and corn in a food processor and push the button. ROAR! That`s how my processor screams. I hope my neighbor forgives me all the time. 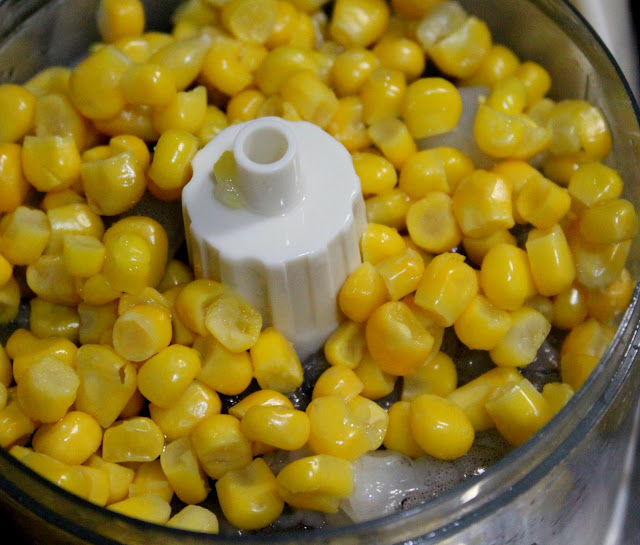 The stuffing is ready now. Oh no, it`s not ready. Season it with salt, pepper, coriander, and cayenne pepper. 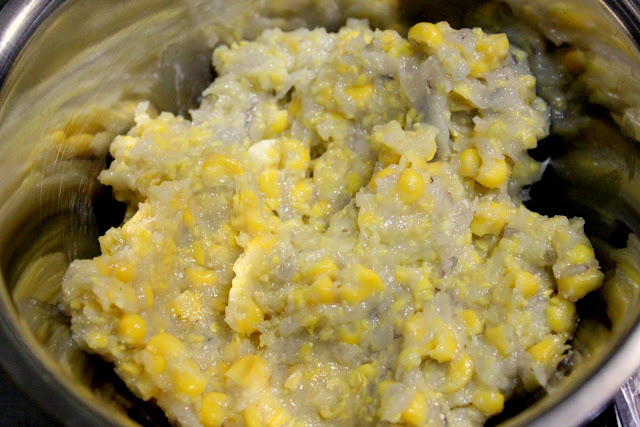 Now let`s work on the mushrooms. Shiitake mushroom usually has a rather thick and fat cap with a hard stem attached on the middle beneath the cap. Hey Mario, come here get your mushroom!
Sorry. I told you how much I love Mario and mushroom, right?
You need to remove the stem before stuffing.  I have no idea if there`s a proper way to destem this mushroom, but here`s how I usually do it.
Hold the cap with your left hand and the stem with your right thumb and index finger. Snap the stem to the side while slowly turning the cap around. You`ll see how the stem will slowly dislodge from the cap and leave a nice empty space. Just try not to directly pull the stem out because you`ll end up tearing up the cap, which is not good because we need them to hold the stuffing. My explanation might seem discouraging, but believe me. This should be easy, especially if the mushroom are big ones. 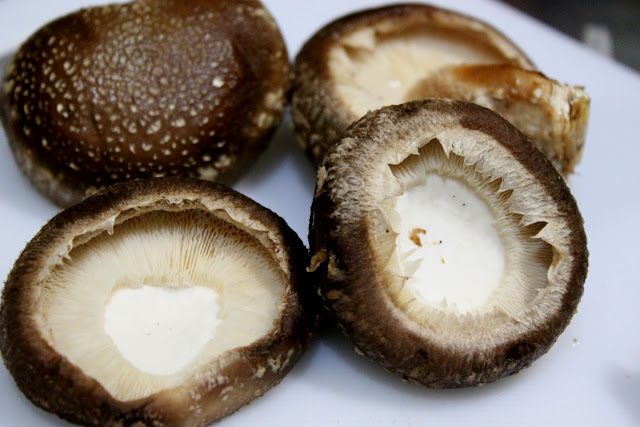 Never throw away the stems. Ever. They`re as good as the cap. Just chop or slice them up and set aside. 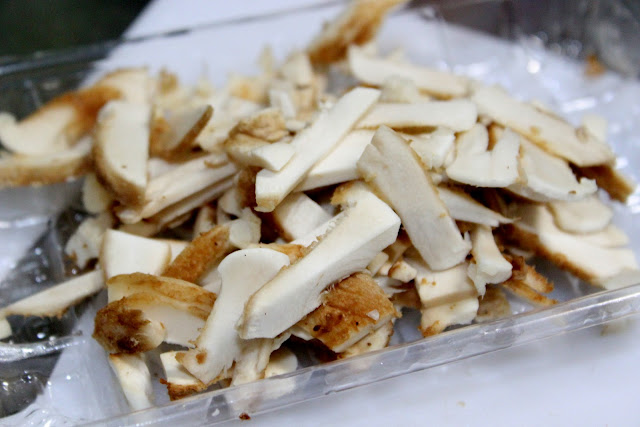 So, these are the caps and they`re ready for stuffing! 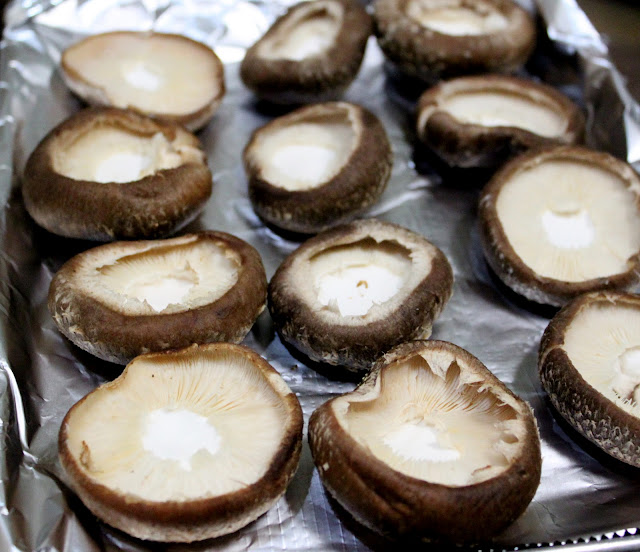 Use a teaspoon to stuff the filling into the cap. Just look how cute they are! 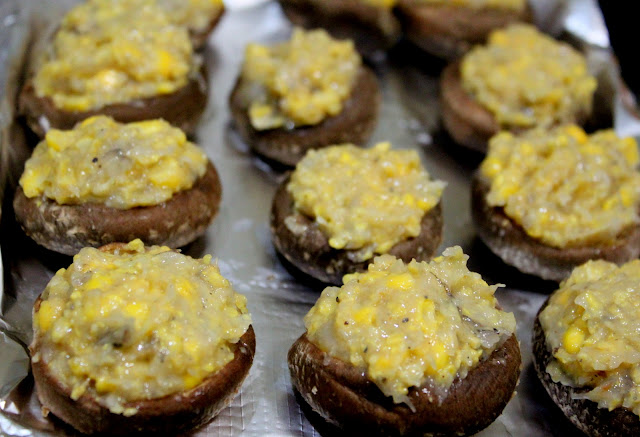 Now drizzle and heat olive oil on a frying pan and start sauteing the mushrooms on a low heat. Start with the cap on bottom first. Don`t crowd your mushrooms, otherwise they won`t brown. Or something like that. That`s what I can remember from Julie & Julia. I do follow that, but only this time, I purposely crowded my mushrooms because I want the stuffing to be steamed while frying and I put a lid on so the heat retains inside. 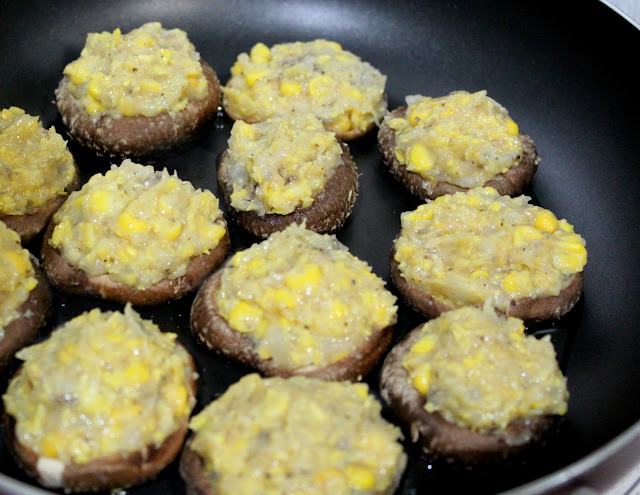 After 5 minutes or until the cap gets wilted and browned (or a bit burned), flip them over, and brown the stuffing too. Although, the corn and shrimp get cooked quite fast, I kept flipping both surfaces to make sure they`re properly cooked. 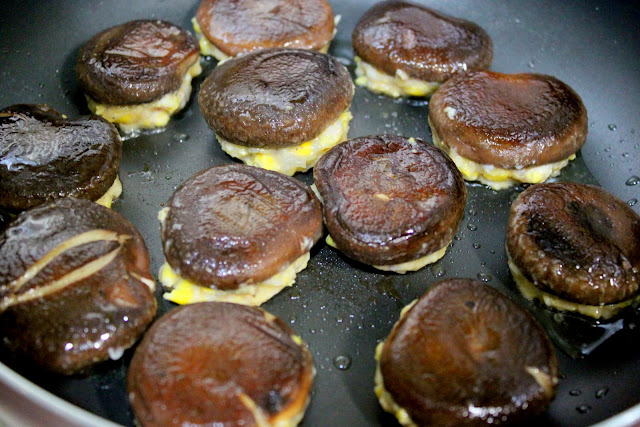 So, when your mushrooms are done, set them on a plate.
Don`t forget the precious stems. Brown them with sesame oil and stir in soy sauce, vinegar, and fish sauce. 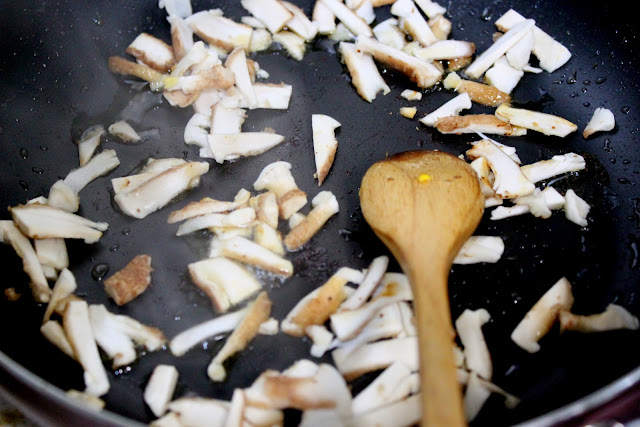 Place the stem on the plate with the mushrooms and drizzle the sauce over. 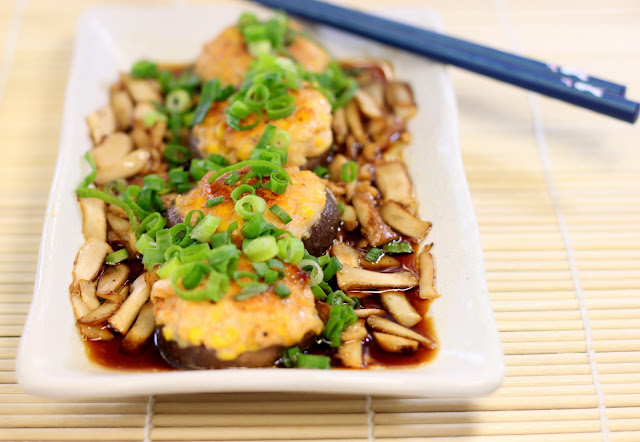 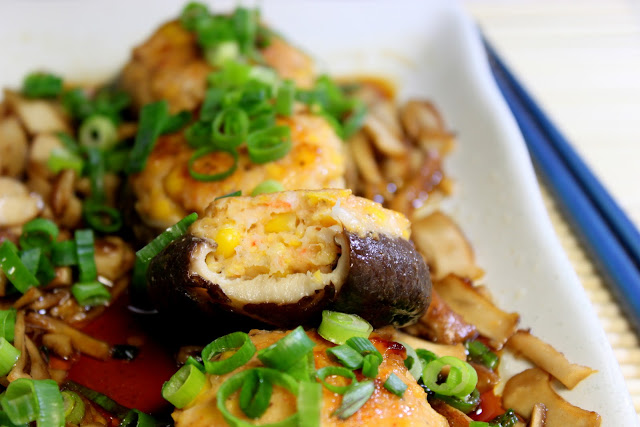