Husband had been asking me for ages when I`d make him pineapple cookies. These cookies are famously known in Indonesia as "Nastar" and apparently one of his favorites. About 3 months ago. he even bribed me with a brand new microwave oven I`ve always wanted, or maybe I made him to, hahah! After running out of excuses and feeling bad for keeping him waiting, last night I finally made the cookies, first time in my life. I even decided to make the pineapple jam by myself. Luckily, the pineapple I bought at the supermarket has a small paper sticking on it for the instruction on cutting the fresh pineapple. I completely had no idea what to do without it :p 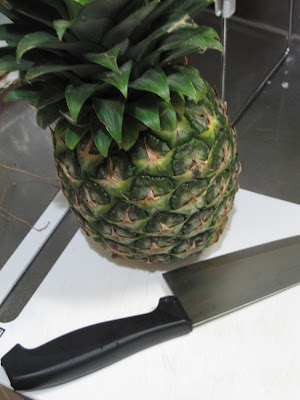 Here is what I needed for the jam:
- One fresh pineapple
- 100 g sugar
- Cinnamon powder


1. Cut the pineapple, put into blender or food processor, and puree it.
2. Transfer the puree to saucepan and put it on low heat. Stir it occasionally while the juice is evaporating. Keep stirring it when the puree starts getting thickened. This may take like 40 minutes or so.
3. When there`s no juice/water left, add a pinch of cinnamon powder.


1. Place softened butter and sugar into a mixing bowl and cream them until the mixture`s color turns pale
2. Add egg yolks to the batter and keep mixing
3. Add flour with spoon gradually
4. Dough is ready when the dough doesn`t stick on the mixing bowl or spatula
5. Get a small amount of dough (mine was 15 g) and flattened it on your palm
6. Place one half of tsp of jam on the middle of the dough
7. Wrap the jam with the dough and shape it into a ball
8. Place the balls on cookie pan and sprinkle the almond on top
9. Preheat oven at 160 C
10. Bake in the oven for 25 mins


Some recipes I found use more sugar for the dough. But I prefer to use less sugar because the jam is sweet enough. The cookies have sweet (but not too sweet) cheesy flavor which goes perfectly nice with the sweet sour jam. And the most importantly (for me), he loved the cookies :)))) 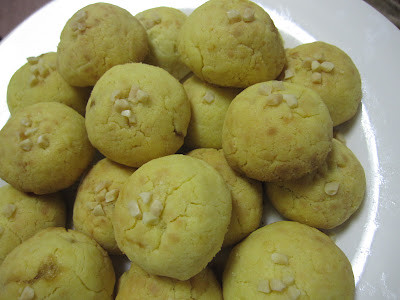 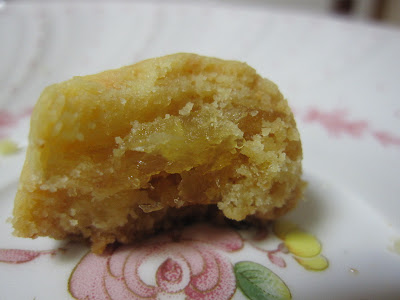 Couple days ago our lab had a farewell party for a visiting researcher who is going back to his country next week. Then, as one of the menu, my lab mates made chijimi, or savory vegetable pancake. Chijimi itself is a Japanese name for this Korean dish that originally named as "jijim". I happened to have a Korean friend who actually introduced me to this pancake. However, it turns out that people in Okinawa island of Japan also have the similar dish with a different name, which I completely forgot what it is. Will ask them again next Monday :p
Anyway, frequently compared with Japanese okonomiyaki (also vegetable pancake with a slice of pork on top) that mostly use cabbage for the fillers, chijimi uses nira instead. Also, speaking of size,chijimi is much thinner than okonomiyaki.
Another important ingredients for chijimi is sesame oil. First time I made my chijimi, I`ve forgotten this sesame oil and it just went wrong. I mean, on my personal taste, it will never be chijimi without sesame oil :p

So, here is the recipe for chijimi batter:
- 200 g cake flour
- 250 ml water
- 1 egg
- salt and pepper
Mix them all then you`ll notice that the batter has a light consistency. Chijimi is supposed to be thin and crispy on the edge.
Then, for the filler, you can add any vegetables, fish, or even meat as you like, but here is what I chose:
- Nira
- Leeks
- Maitake mushroom
- Dried shrimps
- Squids
- Fried tofu strips
Everything is chopped, except for nira. I cut it into 5 cm pieces because I love the big chunks of nira in chijimi.

After your chijimi mix is ready, heat your frying pan (mine was 18 cm in diameter) with few drops of olive oil. Some recipes recommend to keep the batter for 4 hours or so in refrigerator to get a better result. But I was  too hungry to wait so I just continued with the frying and it worked just fine.
Spread your mix on the pan as thin as possible
When one side of the chijimi starts to get dry, add sesame oil surrounding it, then flip it to get the other side cooked. 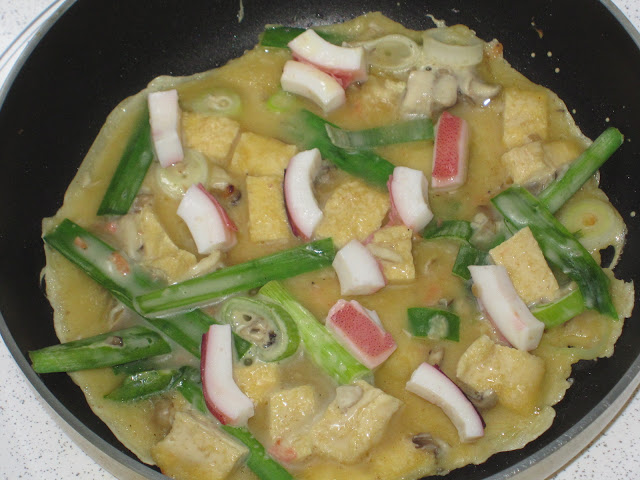 When both sides are golden brown with crispy look, your chijimi is ready.

Now for the dipping:
- Soy sauce
- Fish sauce
- Sesame oil
- Chili powder (or not, if spicy food isn`t your thing)

Cut your chijimi into slices then dip it to the sauce. Yummmmyyy!!! 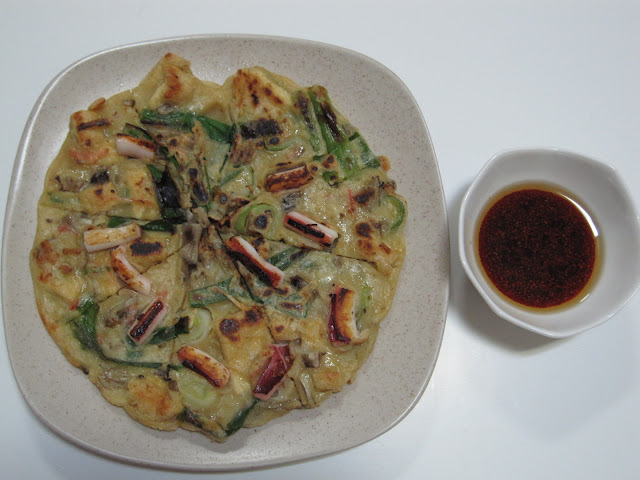 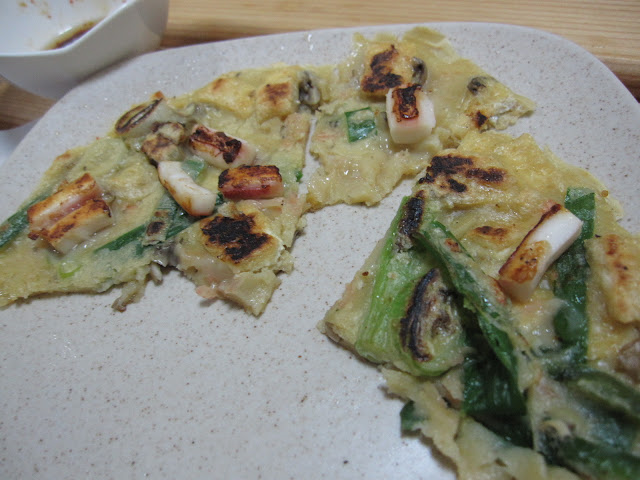 ...with these lovely macarons: 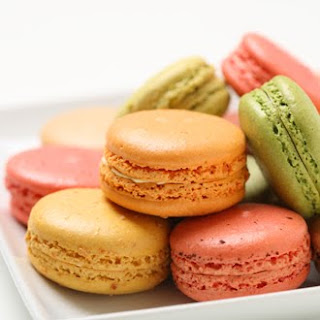 Aside from the fact that they are mostly sugar, what part of them that makes your mouth is not watering???

I promised (to my self) to do 1 hour exercise (aka walking) for 3 macarons. I think that`s good enough for a deal :p

My friend is getting married today!!! Ooooooh...sooo excited!!
Can`t wait till she tells everything in her blog :DDDD

p.s. It`s Saturday morning. Husband is still asleep and I have to go feed my cells in 3 hours. Sunday has to be 100% me (or even better, us) time before starting a whole hectic weeks from next Monday!
at 10:45 AM 2 comments

My cells are alive (yay!). We`ve got our preliminary data (yay!). Boss gave me list of works that I should get them done quite soon. Some parts are okay as I`ve done similar works before. But other parts that I, and the whole lab members, have never done before seem intimidating. So, I just gathered some related papers and hopefully I can try something out.

Anyway, here I am enjoying my Friday night. For this week, cells need routine feeding on Sunday. So my Saturday is off from work and I`m even having a lunch date with Husband. Sushi. YAAAY!
at 7:59 PM 0 comments

Here is an alternative to eat your vegetables. I imagine having kids one day and making this for them as I probably will have problems asking them to eat their sliced and boiled vegetables. Blend them all into soup is one of good ideas I found in cooking blogs.
So I gave it a try with onion, potato, carrot, and asparagus. To be honest, I didn`t really like how it came out because it seemed like I put too many potato and carrot. My soup became really thick and sweet. But hey, that was my experiment with food. You surely can adjust the ingredients as you like. Or if you like sweet soup, you might want to try the following recipe I made.

1. Stir fry sliced onion with olive oil until it gets caramelized.
2. Add chopped garlic and mushrooms
3. Add water, or chicken broth if you want more savory taste
4. Add potatoes, carrot, and asparagus
5. Bring it to boil
6. Blend the vegetables using hand held blender
* As I concern about the plastic-made materials surrounding the blender blades, I waited until my soup gets cooled down a bit before I put my blender in it.
** If you use a blender that comes in a container, you can transfer the soup in batches to the container, blend it, and put them back to your pot.
7. Serve it in a bowl and garnish it with parsley 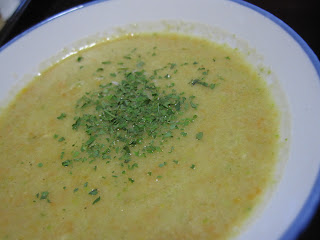