Hey hey, it`s Saturday, baby! We`re planning to go to the city this afternoon, so I seem to have enough time to write this up and cook our lunch. I was hoping we could just have lunch/dinner outside like a real date, but I`ve spent too much yesterday for groceries. When I mentioned about dining out, his face was saying, "But what are you going to do with the food piling up in the fridge??"
Lesson for me: don`t buy any food at all on Friday night if I want to have lunch date on weekend.

By the way, this isn`t our lunch menu today, as I haven`t started anything with it.
This octopus rice bowl is one of so many kinds of what so-called takikomigohan (炊き込みご飯), or Japanese rice dish. It`s basically cooking your rice with other food ingredients. They can be vegetable, fish (grilled fish too!), or meat. Are they raw? Well, they can be both. I have no worries using raw vegetables in this dish as they get cooked very easily. But for fish and meat (I`ve never tried meat, though), I think I`ll cook them first before tossing it into the rice. I used boiled octopus for the rice. In Japanese, octopus is tako and rice is gohan, hence the name takogohan. This one is really easy and quick to prepare so I guess you might want to give it a try.

Here I have store-bought..or store-boiled octopus. I`ve never boiled octopus by myself, ever. I don`t want to either. I`ll say the same thing if you give me perfectly alive lobster to cook. I`m a complete chicken. In case you never tried one, octopus has a chewy texture, which probably quite similar with squid, although with less flavor. But I still love it!
So, cut up the octopus into chunks. Alright, I`ll use word "tako" instead from now on as it`s much quicker to write. 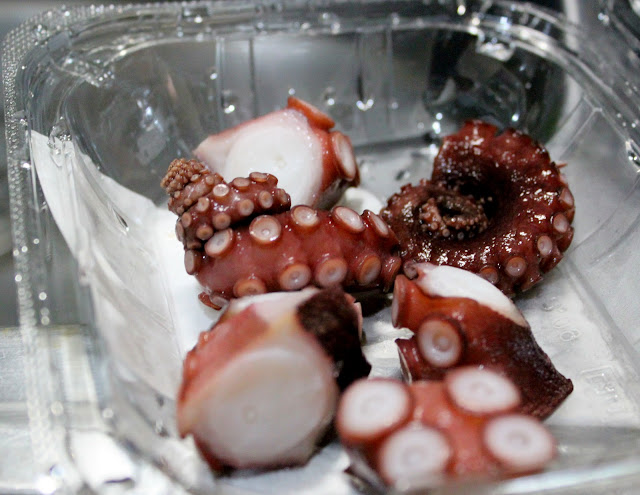 Start with washing and rinsing rice, add the tako chunks, garlic (or not. I have no self control), lots and lots of ginger, and dry shiitake mushroom. 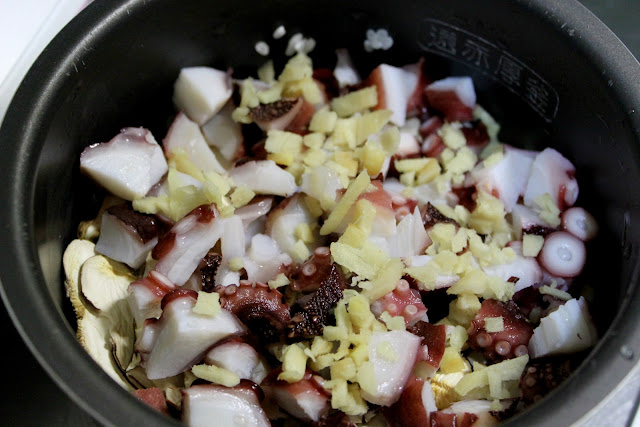 Depend on how much rice you use, pour in water as recommended for your rice cooker. I usually bring up the water a bit higher (just a bit) from the marker line I supposed to refer. I think this will help the cooker to cook rice despite the amount of non-rice ingredients I used. It`s alright to just follow the marker lines, though. It`s better to have your rice ended up dryer than what you wanted, because you can add some water and recook it.
For seasoning, add soy sauce, salt, and pepper. Mirin too, if you want it to be slightly sweet. Lightly stir up the water. 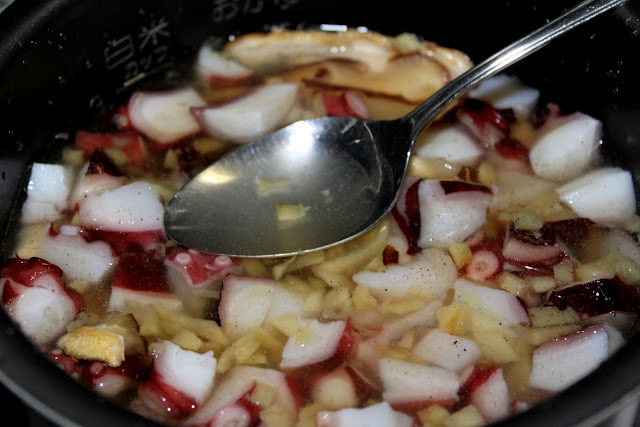 Set it in the rice cooker and turn it on. 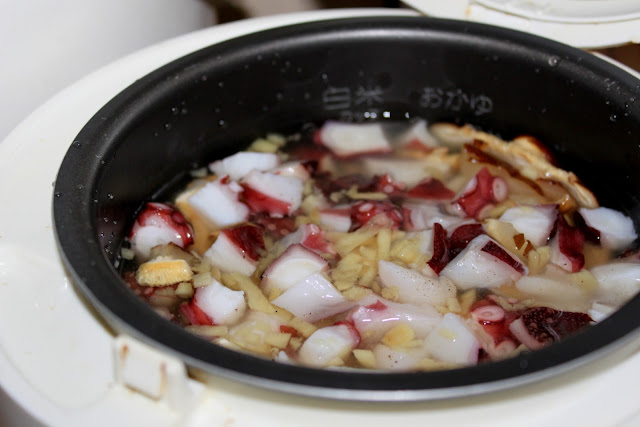 As I want a side dish for the rice, I prepared another quick and simple meal.
Fried eggplants. This is one of my MOST favorite vegetables. I`m sorry I don`t have nice step-by-step pictures to show you, but really, this is very simple to make.
Cut up the eggplants (any shapes you want, but no need to peel off the skin) and brown them on a frying pan. I simply sauteed them, but you can also quickly deep frying them.Set them aside.
For the sauce, mix soy sauce, oyster sauce, sesame oil, and ginger (paste or powder will do great) in a small bowl.Place the eggplants on a plate and glaze the eggplants with this sauce. As I really love this sweet and savory sauce, I just pour it all over the eggplants.
Sprinkle benito shavings (katsuobushi) on top. If you have seaweed flakes, add them too.
Side dish is done! 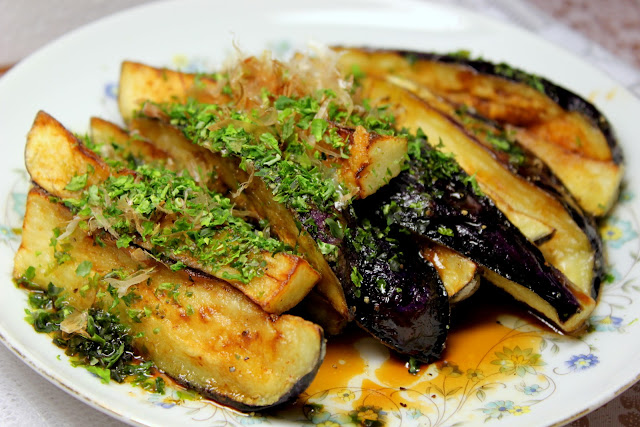 Here is another picture of fried eggplants I made before. With more sauce and fried garlic. I think I fried my eggplants longer in the picture above, that`s why their skins got so wrinkled up. But both tasted good! 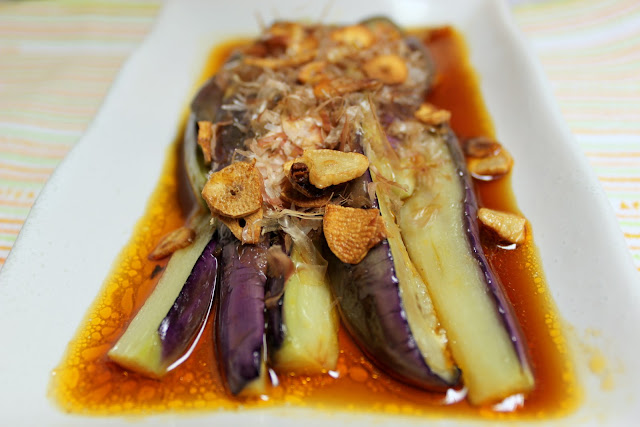 Rice is done too! This is how it looks when you open the lid. Oh, I forgot to tell you one thing. As the rice will swell up during the cooking, the ingredients on the surface will rise up too. So, don`t cook the rice with the maximum amount designed for your cooker. If your cooker is a 3-cup cooker, try using 2.5 cup rice top, like what I did here. You can see how full it becomes when everything cooked up. 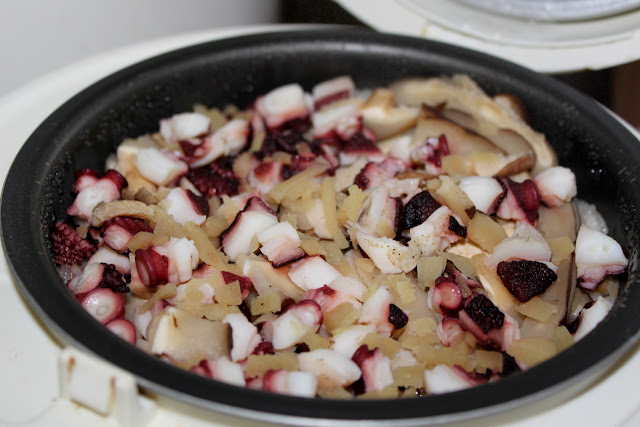 Now, final work. Mix it using your rice spatula so the flavor and ingredients completely combined. 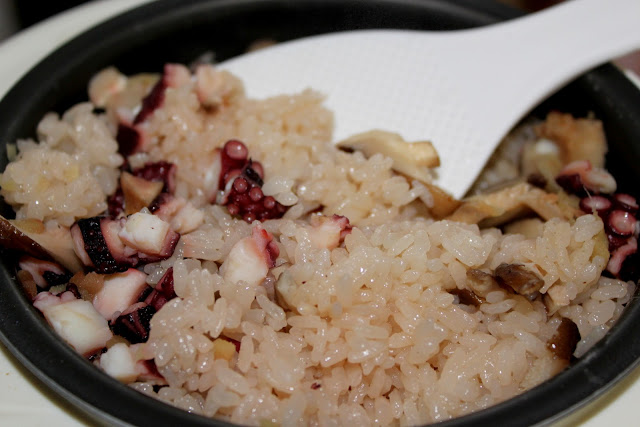 Serve the rice in a bowl and place some eggplants on top. 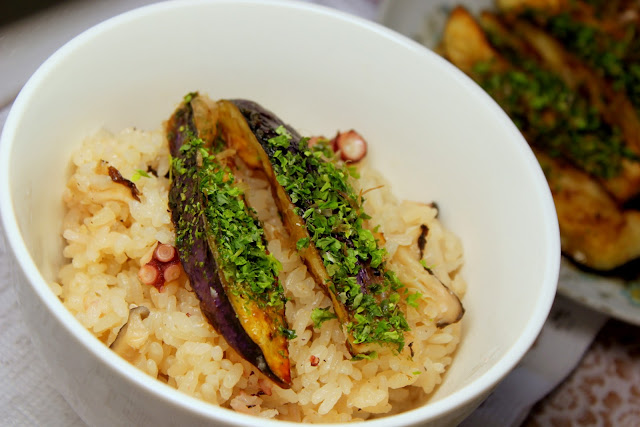 Enjoy the rice, the eggplants, and your weekend!